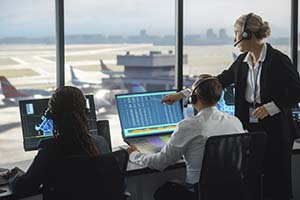 For the first time ever, Management Concepts was excited to support the Professional Women Controllers (PWC) as a Diamond Sponsor at the annual National Training Conference (NTC) on April 19–22 in Charlotte, NC.

A royal theme carried through the event in “the Queen City,” and conference attendees celebrated being back in person after two years of virtual activities. Not all was fun and games, however. NTC attendees mixed camaraderie with learning, professional development, and current topics affecting the Federal Aviation Administration (FAA).

Plenary speaker Wendy Buckingham, a lieutenant colonel in the U.S. Air Force Reserves Judge Advocate General (JAG) Corps, spoke on “Resiliency in the Face of Life’s Battles.” Her moving and inspiring story detailed her combat duty in Iraq as an active-duty U.S. Air Force Captain JAG officer who almost lost her leg due to the improvised explosive device that tore through the armored vehicle convoy in which she was moving from base to base, the long healing process, and the determination that has carried her throughout her life both during and outside of her military service.

Tim Arel, acting COO of the FAA, sat down with Jenn Lemmon, president of PWC, for a fireside chat that included questions from PWC as an organization and from individual members. Arel touched on the progress that has been made over recent years in the FAA workforce while acknowledging the need for further improvements in promotion, retention, and filling open positions created by past hiring freezes with competent, well-trained individuals. Arel also discussed the funds received from the recently passed infrastructure bill and the allocation of funding across the country to modernize control towers at smaller regional airports and evaluated the feasibility of improvements and upgrades in larger airports.

Management Concepts had the honor of wrapping up the conference by presenting “Giving and Receiving Feedback.” This four-hour module is one of 30 topics from the Professional Government Supervisor Program, with content aligned to the Office of Personnel Management Supervisory Training Framework and the Senior Executive Service’s Executive Core Qualifications.

Management Concepts is looking forward to even more collaboration with the women leaders who make up PWC. Until then, check out PWC NTC event photos on our Facebook page.

Vera Medici is Marketing Manager, Events & Strategic Partnerships at Management Concepts. In this role, she communicates and collaborates with clients, organizations, and strategic partners. She prepares for and manages all aspects of participation at trade shows, special events, and webinars and expertly manages all social media activity. Vera holds a Bachelor of Arts degree in Communication from George Mason University.