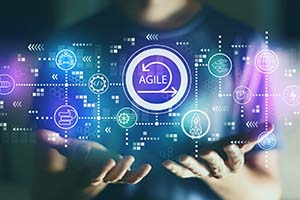 How to Effectively Implement Agile in Government Projects

You have a new project!

That’s generally exciting news. It means you have the opportunity to build something from scratch and generate new prospects for your team. But then, the other shoe drops.

While Agile has been around for two decades, many government agency project managers are just now beginning to understand the practice. One reason for the delay is that the rules and structures of government work can make an Agile implementation a bit more complicated.

Jeff Beverage, the owner of Corner Post Management Experts, suggests that the nature of Agile can make projects more daunting for both project managers and contracting officers. “The nature of federal acquisitions is historically driven by the strict definition of scope and all efforts to manage time and cost in completion of the contracted scope. Contracting Officers and federal PMs are still getting used to the idea that an Agile project fixes time and cost (per sprint) and leaves the scope as a variable to be defined and refined throughout the period of performance. Moving away from a detailed Statement of Work toward an outcome-focused Performance Work Statement is better for Agile development efforts. Fixed-price contracts can still be used — hire an Agile team for a fixed number of sprints at a fixed cost per sprint — but it’s important for the government to understand that what it is buying is the team, the time, and the process, not the deliverables.”

That can actually be an advantage. John Barker of Barker Management Consulting contends that ultimately, that’s often what the government needs. “The government has a stated purpose of modernizing, securing, and moving more of the technological footprint to the cloud. Agile implementations will allow them to re-prioritize very quickly the pieces or modules of a program if significant security deficiencies are detected, equipment is discovered at or past end of life, or critical resources such as senior personnel are close to leaving a program.”

Barker does concur with Beverage that the steps toward the goal can sometimes overshadow the goal in Agile implementations, and that becomes problematic. “A major pitfall is losing sight of the overall goal of the project. A team can get caught up in the sprint cycle and incorporate new user stories. Time goes on, and a minimal viable product (MVP) has still not been released because the end vision has been lost in the weeds of making stakeholders a bit too happy.”

So, how do you actually get the process going properly? The guidance and cautions above provide the guideposts. It’s a matter of setting down the proper ground rules (in an environment that sometimes seems to be “rules-free”). Project managers and contract officers often sacrifice four fundamental practices, believing they don’t belong in an Agile implementation. On the contrary, those four boundaries are absolutely essential.

As the project manager of an Agile team, one of your key roles is to be the resident “nag.” Nudge people on the nature of the Agile process. Remind them of the tenets of the Agile Manifesto. Be sure you work within the contracts process to build a mutual understanding that the government is paying for sprints, MVP, and small-scale deliverables against a regular routine.

The mistake some agencies make is that they believe that implementing Agile will result in getting deliverables faster. The project manager’s role is to ensure that they know they’re going to get deliverables of value at the end of every sprint and that the government is getting a higher degree of flexibility than in conventional projects. If that’s the case, why select Agile implementation? Flexibility, transparency, customer orientation, and team engagement make for a winning combination.