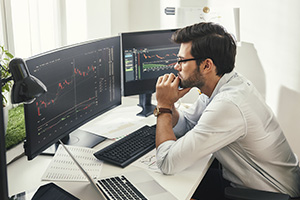 In an effort to improve government effectiveness, Chief Data Officers (CDOs) across federal agencies have made significant progress towards creating a more data-driven government. A recent survey revealed that when complete and precise data are shared among agencies (and made available to the public), it informs policy and legislation, improves governmental effectiveness across the board, and decreases redundancy of resourcing. This impactful progress and research have only made clear the need for a data-literate workforce.

The COVID-19 pandemic is proof of just how mission-critical data can be; gathering and interpreting real-time data is required to make rapid, evidence-based decisions and inform policymaking at every level of the federal government. In addition to the importance of tracking evolving pandemic public health data on a daily — and even hourly — basis, the State Department used a data-centric approach to formulate a plan to bring home US citizens abroad when the pandemic struck.

The new administration released a memo on June 30, 2021, entitled Evidence-Based Policymaking: Learning Agendas and Annual Evaluation Plans, which reinforced the role of CDOs emerged as a critical strategy for implementing the guidance set out by The Digital Accountability and Transparency Act of 2014 (or DATA Act) and the 2018 Foundations for Evidence-Based Policymaking Act (or Evidence Act). The DATA Act required the Treasury Department and the Office of Management and Budget (OMB) to set up a government-wide data system for federal government spending. This data began being published in 2017 as a unified report, available via The USAspending Application Programming Interface (API). The DATA act further standardized data elements and reporting for recipients of federal grants, contracts, and other federal funding, increasing accuracy and compliance and allowing for a clear picture of spending that compliments agency spending data.

The Evidence Act, which established the current requirements for CDOs, places an even greater emphasis on the collection and usage of government-wide data and thus on the CDO role. The Act resulted from the guidance provided by the US Commission on Evidence-Based Policymaking, which recommended improvements including increased data accessibility, strengthening privacy protections, and increasing the ability of the federal government to utilize the data it already collects. Doing so makes it possible to bridge the gap between the evidence that is available and the evidence that is required to create sound governance and effective policies can be enacted to reach the ultimate goal: to better serve the public.

The Federal Data Strategy “provides a common set of data principles and best practices in implementing data innovations that drive more value for the public,” with an initial action plan that was released in 2020. Action plans will be created annually to assess emerging needs and prioritize the next steps. The Federal Data Strategy includes an extensive set of recommended practices across three main categories:

With improvements in data infrastructure, the federal government has made space for CDOs, not only as a role, but as a key part of untangling, organizing, and sharing data for useful outcomes.

CDO Recommendations for a Data-Literate Workforce

A survey of CDOs from a variety of federal agencies found that they are rapidly implementing the critical practices laid out by the Evidence Act and Federal Data Strategy and have made considerable progress in meeting benchmarks. Three-quarters of CDOs — including those representing all of the largest agencies — have launched data governance boards in the past year, a requirement laid out in the 2020 Action Plan. Many agencies have further begun publicly publishing information regarding their agencies’ activities for increased accountability and transparency.

The survey found an emphasis among CDOs on the importance of a data literate workforce, noting that “the absence of data literacy is a limiting factor for achieving a more data-driven culture in government.”  61% of those surveyed responded that a data-literate staff was their most important resource. CDOs acknowledged a need for a “balance between developing data governance policies and ensuring capabilities,” reporting that staff spends more than half their time collecting and preparing data. Additionally, they have determined that the automation and streamlining of data collection would allow staff to focus on analyzing and reporting data to inform agency decision-making. To do this, a data literate workforce is not only desirable but necessary.

CDOs recommend making data literacy an agency priority and providing data literacy training for all staff in addition to specialized training based on individual staff needs. Additional strategies include reward systems for staff who make data-driven decisions, incorporating data skills into performance reviews, and implementing agency-wide ‘data days’ to provide all staff with training and information on successes, best practices, and new skills. The CDO Council has extensive recommendations available for review and acts as a resource for CDOs to collaborate and enact their mandates.

If you are interested in improving your data literacy, Management Concepts offers a selection of introductory and advanced data analytics courses as well as an Analytics Certificate Program.