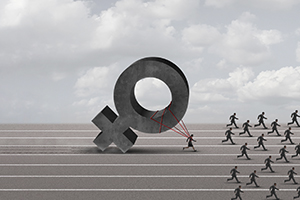 Fifty-seven years ago, when the Civil Rights Act of 1964 became law, women and people of color rejoiced. It was official. Discriminating on the basis of race or gender was illegal. Although the landmark bill changed the “face” of the United States labor force, women still lag in pay equity and advancement to senior-level positions; this is especially true for women of color.

Instances of blatant racism and sexism still occur but are less prevalent. Today, unconscious or implicit biases are more common barriers to advancement, particularly for women.

Unconscious biases are social stereotypes about certain groups of people that individuals form outside of their conscious awareness. They are attitudes based on one’s life experiences and incomplete or inaccurate information. Everyone has them, but most people are unaware of their own biases or assume that they are without such beliefs.

Ask a woman in the federal government or her counterpart in corporate America what unconscious gender bias looks like, and the answers are nearly identical. It shows up when:

The Impact of COVID-19

Gender biases during COVID-19 have been amplified and exacerbated, especially for women with children or caregiving responsibilities. How are women judged when young children appear in the background while on video calls? Do managers judge them as less committed or less able to handle both work and family responsibilities? What happens when a woman with aging or sick parents suddenly finds herself responsible for grocery shopping, picking up medications, or providing transportation to doctor’s appointments because a parent has tested positive for COVID-19 and she needs time off? These responsibilities still tend to fall on the shoulders of women.

For women of color, these challenges are even more difficult because COVID-19 has disproportionately affected minority communities. They are more likely to have a relative impacted by the virus, and therefore they may have more caregiving responsibilities.

For many women in the federal workforce, this is a seminal point in time. Do they leave? Do they scale back their career aspirations? What action should women take when confronted with unconscious bias? And, what can federal agencies do to mitigate its impact?

First, understand that unconscious bias is “unconscious;” therefore, the perpetrators are unaware of how their language and actions can offend, hurt, or prevent women from career advancement.

The federal government has numerous policies protecting employees against gender-based discrimination. The Equal Employment Opportunity Commission (EEOC) has information on its website about filing a claim. However, there are several actions you can take that can be taken before involving the EEOC.

If you are fortunate to work in a psychologically safe environment, speak directly to the person responsible. When people who are unaware of the consequences of their actions are made aware, they may be surprised and grateful for the opportunity to correct offensive behavior, or they may not. If the conversation is unpleasant, speak to your Human Resources department.

Support other women. If there are colleagues who deserve to be promoted but are consistently overlooked, become their advocate. Ensure that they get invited to key meetings, are given credit for ideas they generated or programs they created, and encourage them to get a mentor.

Ask your manager to provide unconscious bias training. A good place to start is the Harvard Implicit Association Test. It is free and anonymous.

Create a no-tolerance culture for bias of any kind. Declare your department a hostile environment for unconscious biases.

Accept the scientific fact that to have a bias is human. Assume best intentions and that everyone wants to honor and respect each other’s life experiences. Collectively decide to “listen deeply,” without judgment, to each other’s stories.

Most importantly, when someone experiences or notices bias, agree to a process for dealing with it. The point is not to blame or judge but to acknowledge its presence so that the behavior that caused it can change. A process to which everyone adheres will build shared, everyday practices that create a culture of respect and inclusivity. These actions can open the pathway to self-reflection, growth, and the opportunity to change old beliefs.

Policies should be examined as well. Have schedules been adjusted to reflect the realities of COVID-19 with all of its additional demands on families? Special accommodations may have to be made for employees who experience long-term side effects of the virus, often referred to as long-haulers.

On March 8, 2021 ― International Women’s Day ― the White House Gender Policy Council was established to ensure a coordinated effort to advance gender equity and equality at the federal level.

It is in everyone’s best interest to address the issue directly. If ignored, productivity, morale, innovation, and creative thinking will decrease. Attracting and retaining talent will become harder. When unconscious bias is confronted openly with the intention of creating an inclusive, healthy work environment, everyone benefits. New behaviors will encourage better decisions, better teamwork, and better outcomes.

Linda Cassell, M.Ed, CPCC, is an independent certified neuro leadership coach at Management Concepts and president of Quantum Leap Coaching and Training, LLC. An expert in leadership development, crisis management, and culture transformation, Linda works with executives in the commercial, non-profit, and public sectors. She holds a Bachelor of Science and Master’s degrees in Education from Kent State University and is a graduate of the Coaches Training Institute. Linda also holds a Neuro Leadership Coach certification from the Mark Waldman program.