Categories Menu
Home » Leadership » Panel Discussion: It Starts with Us: Forging the Future of Federal Leadership 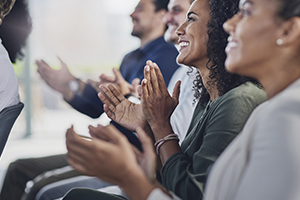 Panel Discussion: It Starts with Us: Forging the Future of Federal Leadership

On Tuesday, February 23, 2021, Management Concepts sponsored a panel discussion entitled, It Starts with Us: Forging the Future of Federal Leadership. The event was hosted in partnership with the Senior Executives Association, the African American Federal Executive Association, and Executive Women in Government.

The Keynote speaker and Director of the United States Domestic Policy Council, Ambassador Susan Rice spoke about how inequities are not always visible, and that people should not only hear about changes but feel a difference. Ambassador Rice shared her family legacy of perseverance and public service in reference to the administration’s commitment to “building a more perfect union — one that represents all of our nation’s people”. Read the transcript of her speech here.

Moderator Tyra Dent Smith, Executive Director of the African American Federal Executive Association (SES Retired) began the panel discussion by asking each panelist to speak to their impressions of the keynote speech. As the discussion continued, each panelist shared how they contribute to increasing diversity in the senior executive service. Here are a few of their remarks:

Clark recalled previously working on an initiative related to “living and embracing the ‘unwritten rules’ that shaped agency culture” and related it to Farm Credit Administration’s practice of pairing mid-career hires with experienced employees to help them navigate the agency culture. She emphasized the importance of understanding individual needs to provide meaningful support, especially during the pandemic, a sentiment that was shared by all.

She recommended that individuals who wish to be considered for the Senior Executive Service (SES) master the Executive Core Qualifications (ECQs). And, in her closing remarks, she challenged viewers to identify one thing that they could commit to doing this year to remove a barrier for an individual or group of individuals.

“Remember that words matter in everything that we do as senior executives as we try to lift up that next generation that’s coming behind us. How we put those institutions in place matters. How we communicate that message matters.”

Edwards shared his memory of a supervisor who sent him on information-gathering missions in which he had to rely on his own reputation without evoking the name of his boss or office. He now understands that this exercise helped him learn how to build relationships, which he emphasized is important for being recognized and selected for opportunities. He strongly recommended that federal employees build their networks over time to demonstrate that they are ready for their next opportunity.

In his closing remarks, Edwards reminded us of the unconscious biases held by minorities and non-minorities. He related that despite our intention to do our best, we need to be self-aware and have an awareness of what’s going on around us to be politically astute and succeed within our given environments.

Gardner related many of his rich personal and professional experiences. He echoed Ambassador Rice’s statement that achieving equity is not a special project and added that it is not what we do but who we are and that it requires the whole of government.

He spoke about the need for leaders to strive to understand, to take a closer look at policies and procedures that may unintentionally prevent certain people from excelling. Gardner shared that providing professional development opportunities tailored to individual needs was crucial and that if a candidate was unable to find a good fit within their agency, a mentor should help them find an appropriate role elsewhere in the federal enterprise.

Perhaps the most impressive insight that Gardner shared, which was applauded by the other panelists, was that the responsibility for forging a career path lies squarely with the candidate. No mentor or position can elevate an individual unless or until that person takes advantage of every opportunity to prepare themselves for their future. He proposed that every employee build their own diverse board of directors consisting of at least four people who are not emotionally tied to them. These people should provide objective criticism and advice — a mental check-in.

In his closing remarks, Gardner reminded us of the words of Dr. Martin Luther King, Jr. that ring true today:

Neal began his remarks by referring to Ambassador Rice’s family legacy of struggle, service, and sacrifice. He continued by saying, “We must always do better in order to build a truly equitable society” — that addressing diversity, equity, and inclusion is a marathon that requires focus and dedication. We know that what we want to do is increase diversity in federal leadership positions, but do we know how? Neal referred to his own practice of asking himself which practical and pragmatic steps he can incorporate to increase diversity in his institution.

He emphasized that the tone is set at that top; that it is important for minority leaders to show up in places, such as boards, committees, and events, where they can be a voice in the room to ensure that diverse groups are considered in decision making. Neal added that you must be intentional about creating avenues for opportunity for historically underrepresented folks.

In his closing remarks, Neal expanded upon the idea of establishing a personal board of directors by naming many networking and professional development opportunities that help highly motivated individuals reach their true potential. He echoed the sentiment that in order to be selected for important leadership positions, candidates must always be preparing for future opportunities.

We hope that the immense value of the ideas shared during this panel discussion benefits federal employees throughout the ranks understand what they can do — starting today — to build a more perfect union, one that represents all of our nation’s people.

You can view the entire panel discussion here: