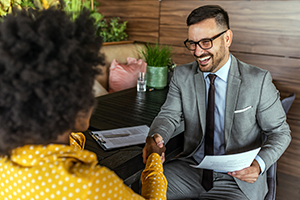 6 Questions That Reveal Which Federal Candidates Will Persevere

There are hundreds of articles, commentaries, and stories of perseverance, stories of those who overcame seemingly insurmountable odds. Coincidentally, sheer doggedness does not equate to success. This is not a quest for the successful. It is a quest to find those who have the potential to succeed in the face of adversity.

H. Ross Perot explained the difficulty with identifying those who persevere:

“Most people give up just when they’re about to achieve success. They quit on the one-yard line. They give up at the last minute of the game, one foot from a winning touchdown.”

Inc. magazine dedicated an entire issue to traits common among the persevering which are readily identified in candidates by asking a few germane questions:

Be it a motivating poster on the wall or a file buried in a subdirectory on the C:\ drive, actual documentation breathes life into perseverance. Documentation affirms that the goals are sufficiently well-considered to be in writing.

The more specific the answer, the more likely a candidate has conducted an in-depth analysis of the concern. And the more likely they are working to develop more than one solution.

Perseverance requires eliminating shiny objects and social media has become a massive shiny object in today’s society. Those who have a master plan to keep social media from becoming their master are more likely to persevere. (Except, of course, those candidates who are hired specifically to build the organization’s social media presence).

A broad question like that opens the door for a wide range of answers. The right answers are those that reflect an interest in expanding one’s horizons.

For those who persevere, this is not a question of “what,” but of “which one?” Persevering personalities see achievement in a host of different things that they do. Those who persevere have no trouble finding the impact in clearing out the attic, taking an elderly family member to the doctor, or writing a line of computer code. One of the reasons they can persevere is that they cross Perot’s “one-yard line” on a regular basis.

The “laws of attraction” say that whatever you do/act/think/say will come back to you. Perseverance is attractive. Keeping the focus, goals, and approaches on target pays off for the candidate and the organization.