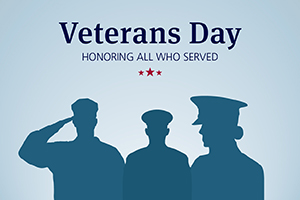 A Veterans Day Tribute – Who Won the Battle?

The supplier.  The smith.  The rider.  The generals.  The king.

With Veterans Day upon us, it’s important to look at the critical nature of all of the team members in our organization, from top to bottom. History has shown us that the smallest actions by individual team members can have event-changing effects.

The Veteran’s Administration in Las Vegas points to Army veteran Kolan Glass as a lynchpin in the battle against COVID-19.  He’s on the front lines of the health care battlefield, as the emergency department’s primary housekeeper at North Las Vegas Veterans’ Affairs Medical Center.  “I clean every room as I would want it if I was the next patient to be staying in it,” says Glass. “I sanitize each room with my full attention.”

In World War II, Audie Murphy enlisted at age 17 to honor his mother, who died just a month earlier.  When a close friend was killed by a German pretending to surrender, Murphy took matters into his own hands, and with a decisive victory over the Germans, earned the Distinguished Service Cross.  From there, this Texas sharecropper’s son went on to earn more than 30 more medals and become the most decorated soldier of World War II.

In Vietnam, William Pitsenberger was a medic just hoping to rescue his peers.  As he dropped from a helicopter into the dense jungle, the second in command on the raid remembers thinking, “this guy doesn’t know what he’s getting himself into.”  Pitsenberger sent more and more wounded back up to the helicopter, staying on the ground the next few.  He saved 60 lives before losing his own.

Each of these men faced the realities of their environment head on.  Each took on the very real possibility that their lives would be forfeit for the sake of others.  When individuals like these take risks on behalf of their country, their choices create ripples throughout the organization. In effect, they become the supplier, the smith, the rider…

In our project environments, we sometimes look to those individuals who already have the plaudits, the awards, and the medals that show their professional competency and valor.  The very real challenge is to dig deeply enough to find (and leverage) the Murphy-, Glass- and Pitsenberger-type individuals in our midst.  While we can clearly see them as heroes now, they doubtless would have perceived themselves as ordinary men who took the actions that the situations and duty required. It is not until the crisis has passed that we realize the courage needed to make some of these decisions.

The Journal of Humanistic Psychology cited three key traits shared by these special individuals—Empathy, Altruism, and Imagination. Each of these traits can be encouraged and cultivated in every member of an organization – in effect, creating an army of heroes.

To build empathy, the authors suggest that a sense of community is paramount.  For Glass, that community consists of fellow veterans facing a common foe—COVID-19.  For Murphy, empathy was the loss of that first friend along German lines.

The altruistic perspective is tied directly to empathy, but with a sense of clear selflessness.  Pitsenberger took that to its ultimate extreme, valuing life, but with a higher value for the lives of his fellow airmen.

The third trait that can be developed is what the authors call heroic imagination.  It’s the condition where the potential heroes can see themselves as heroes.

As managers, we can encourage such thinking by reminding team members of their abilities and possibilities.  And in the process, we can remind them of those who pave the way through individual valor.  Names like Glass, Pitsenberger, and Murphy are joined by ordinary heroes every day.  It’s up to us to help them begin their heroes’ journeys.

Carl Pritchard, PMP, PMI-RMP, is principal and founder of Pritchard Management Associates and a senior instructor at Management Concepts. An expert lecturer, author, researcher, instructor, and coach, Carl focuses on project management, particularly risk and communications. Carl earned a bachelor’s degree in journalism from The Ohio State University and PMP. He welcomes your comments and insights.