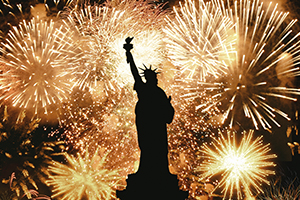 The Freedom Project and The Example It Sets

Most people don’t think of the birth of our nation as a project. But what we celebrate on July 4 (or 3, as the case may be) most certainly is. Creating the Declaration of Independence involved the coordination of diverse resources toward a specific goal, with a clear, unique outcome. What makes July 4 so special is that it was the day on which the authors and signers of that founding document declared the project (or at least that phase of the project) complete.

The creation of the Declaration affirmed that all projects arise in response to needs. The authorship and approval of the Declaration represented a massive project with significant change and conflict. The outcome was meaningful. The sacrifices were significant. Put all that together, and you have a project that people continue to honor and revere almost 250 years later.

“Believe me, dear Sir: there is not in the British empire a man who more cordially loves a union with Great Britain than I do. But, by the God that made me, I will cease to exist before I yield to a connection on such terms as the British Parliament propose; and in this, I think I speak the sentiments of America.”

Response to Needs
The British oppression of the states in the late 1700s was no minor matter. Thomas Jefferson time and again expressed his love for the status quo, but as the British imposed more and more taxes, rules, and regulations on the colonies, people had had enough.

Authorship and Approval
While Thomas Jefferson normally gets the credit for writing the Declaration, it was actually created by committee. Jefferson penned the first draft, but it was edited by the Continental Congress. The group effort is sometimes credited with getting Congressional approval.

Conflict is the Norm, Rather than an Anomaly
Any reading of the history of the Declaration of Independence features arguments, disagreements, and a hundred different versions of what the Congress should and could agree on. Some of the conflicts (particularly those in New York and Maryland) dragged on into late June, with New York only signing on after July 4. For the other states, the arguments were sufficiently compelling against reuniting with England that they could tolerate almost any agreement.

Meaningful Outcome
There was a time when every schoolchild could recite the first few lines of the Declaration from memory. While that kind of rote instruction is no longer de rigueur, the sentiment behind it should linger. It matters; word for word it matters. This project matters — every aspect of the deliverable matters.

Sacrifices Merit Respect
As we near July 4, it’s important to reflect on the last line of the Declaration. “We mutually pledge to each other our Lives, our Fortunes, and our sacred Honor.” These were not words taken lightly. And, many did ultimately sacrifice both their lives and fortune. While on projects, we rarely have to make those kinds of sacrifices. We do give up time and effort and energy. We give. We share. We commit. So do our team members.

As we come upon July 4, it is truly a time to honor our country, and the project effort to make it go from radical theory to amazing outcome. If we can muster even the smallest measure of the founders’ resolve, success is inevitable.