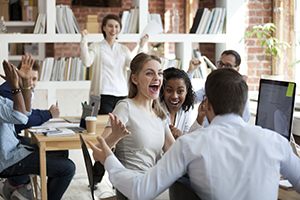 Celebrate the Astounding Accomplishments Made by GAO in FY2019

The Government Accountability Office (GAO) “exists to support the Congress in meeting its constitutional responsibilities and to help improve the performance and ensure the accountability of the Federal Government for the benefit of the American people.”

That seems like an awesome responsibility, and looking through GAO’s Performance and Accountability Report Fiscal Year 2019, you see that it covers absolutely every aspect of our government. It really makes their FY2019 accomplishments even more impressive. The recommendations they made saved $214.7 billion. That means that for every dollar that was invested in the GAO budget, they gave a return of $338! That is nearly double the $171 average return they provided over the past five years.

Upon the release of the report, Gene L. Dodaro, Comptroller General of the United States, and the head of the GAO said, “I want to thank Congress for its support and congratulate every GAO employee for their contributions that helped to make 2019 another highly successful year.”

While dollar signs are definitely important when evaluating performance, in this case, it is only the beginning of amazing success. In addition to the financial return, the GAO’s work also helped Federal agencies make 1,418 non-financial improvements, (i.e., unrelated to monetary value).

Let’s look at few highlights of the astounding accomplishments the GAO contributed to:

These descriptions cover a fraction of GAO’s important work, recent accomplishments, and future concerns. Take a moment to browse through the report to learn more about how GAO approached their discussions, analyses, and challenges with further details about performance.

­Natalie Komitsky is the Content Marketing Manager at Management Concepts. For more than ten years, she has been creating compelling content that tells stories, communicates ideas, and captivates readers. She holds a Bachelor of Arts degree in English, Nonfiction Writing, and Editing from George Mason University.