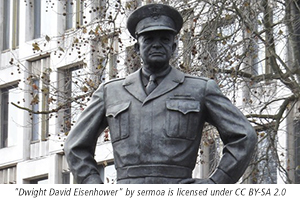 Let Us Stand Together as a Grateful Nation

In the words of President Dwight D. Eisenhower on October 8, 1954

…It has long been our custom to commemorate November 11, the anniversary of the ending of World War I, by paying tribute to the heroes of that tragic struggle and by rededicating ourselves to the cause of peace.

…I, Dwight D. Eisenhower, President of the United States of America, do hereby call upon all of our citizens to observe Thursday, November 11, 1954, as Veterans Day.

On that day let us solemnly remember the sacrifices of all those who fought so valiantly, on the seas, in the air, and on foreign shores, to preserve our heritage of freedom, and let us reconsecrate ourselves to the task of promoting an enduring peace so that their efforts shall not have been in vain.

As we observe Veterans Day, let us honor President Eisenhower’s wishes and reflect upon the sacrifices made by our service members. Let us stand together as a grateful Nation and pay tribute to the men and women who leave families behind, endure austere environments, and face mortal danger in combat to preserve our freedom and promote stability throughout the world.

All of us at Management Concepts offer our thanks to the members of our military for their sacrifices and commitment to protecting our nation.

Todd Peppe is Director of Program Management at Management Concepts. Todd continues to serve as an Officer in the Marine Corps, with over 27 years on both active duty and the reserves. He holds a Bachelor of Science degree in Economics from the State University of New York, Plattsburgh, and an MBA in Finance from Boston University.