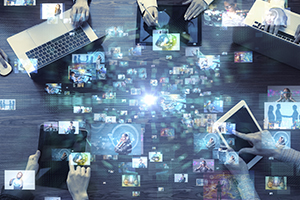 As we discussed in Part I and Part II, the onslaught of technological advances we have experienced in recent years has forever changed the way we live and work. In this final part of our series, we will examine how panel experts have addressed workplace culture issues that directly impact the Federal workforce.

During a panel discussion, Brittany Sickler of the SBA, Ted Kaouk of the USDA, and Jenny Mattingley (a legislative consultant in Federal management practices) discussed numerous questions about Federal culture, where it’s headed, and how it’s evolving. The panel skewed young, which is important to note, considering millennials are starting to make up a greater part of the Federal Government. This immediately became one of the main talking points of the panel. With the oldest millennials reaching their mid-30s, the Federal Government is beginning to see a large shift in its culture. Coinciding with massive shifts in technology, the Federal Government will most likely see drastic change in coming years.

What Is Federal Culture?

Federal workforce culture is challenging to describe, and therefore difficult to gain an understanding of. Most Federal workers would agree it exists, but if asked to define it, each would come up with a different description. The panelists agreed on one thing; there is plenty of bureaucratic overlap. People of different backgrounds, expertise, and education can be found across departments, especially considering the range of functions of each agency.

The Federal Government has changed drastically in the past few decades, which may explain why it’s difficult to accurately define Federal culture. In the early 90s, the Clinton Administration underwent a massive reorganization program that reduced the number of workers, management levels, and oversight measures. It streamlined Federal bureaucracy but also left more work for fewer employees. Conversely, the decrease in managerial levels led to more flexibility. While there was more work to be done, employees could approach problems with more collaborative, team-based methods under less managerial scrutiny.

So, What’s the Same?

Mattingley said there is a “fear factor” in Federal work. When performance drops, a project runs into problems, or an outcome isn’t at the expected level, scrutiny can come from above that results in pressure on Federal workers. This can breed an “If it’s not broke, don’t fix it” attitude in Federal Government which hurts creativity and flexibility, and stifles the opportunities for learning and new training opportunities. The Federal Government has to be accountable to the taxpayer, after all.

This isn’t to say the Federal Government is completely inflexible. In fact, the government is incredibly aware of the rapid changes happening in workforces across the world.

The amount of services and functions the Federal Government provides is truly massive. For example, networks of information must be scrubbed, screened, stored, and protected with various levels of security and each process must be tailored to the agency’s function. While the Federal Government cannot afford not to adopt new technology and workplace practices, they also cannot afford to train employees to enable their success.

At the end of the day, efficiency means less expenditure, which means less spending of taxpayer money. This is why both Sickler and Kaouk said that they believe innovation in the Federal Government isn’t as bad as it seems. As long as everything is properly documented and transparent, oversight won’t bring catastrophe to projects. With the ever-changing social and technological world, and the growing generational shift in the Federal workforce, oversight functions are well aware that the Federal Government needs to change to effectively serve the American people.

Because of this, agencies hold open houses, research new workplace methods, and retrain their employees to work in the Federal Government of the future — supporting and providing professional and career growth training and leadership development.

In closing, Sickler remarked that she never thought she’d be having open dialogue about Federal culture on a panel in public, a clear indicator that change is happening — or there is at least a shift toward a more open culture.