Posted by Management Concepts on Mar 5, 2019 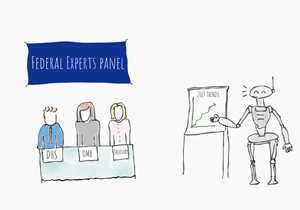 Government Executive, a Federal Government news outlet, recently hosted an event featuring several panels of Federal experts on these three topics. Click here to learn more about the event and refer to our previous post, The Future of Federal Workforce Reskilling, Automation, & Hiring Practices: Part I for additional background information.

The Federal Government often falls behind the curve on new technology and workplace practices. Administrative and budgetary constraints can curb innovation, while politics dictate the pace and volatility of these changes. Throughout three panel discussions, Federal executives in organizations ranging from the Small Business Administration to the Department of Agriculture to DoD to the Peace Corps shared their experiences, expectations, and hopes for the future of reskilling, automation, and hiring the future Federal workforce.

The second panel focused on automation in the Federal Government. Joanie Newhart of Office of Management and Budget (OMB), Bill Pratt of Department of Homeland Security (DHS), and Marisa Schmader of the Treasury Department expressed their thoughts and ideas about using artificial intelligence (AI) and Robotic Process Automation (RPA) in their agencies.

Pratt kicked off the discussion by saying that his agency would benefit greatly with the development of RPA in certain areas. His department used to have a sizeable clerical staff, but has since lost that support; his current staff often has to shelve daily operations for the next day because they are so shorthanded.

All three panelists detailed how each of their agencies has to comb through long lists of data and analytics to find crucial information. To them, paying highly-trained analytics professionals to mine through “junk” data and low-priority work is essentially a waste of talent. If RPA was used to automate low-priority tasks, it would allow analytics professionals to tackle higher-value tasks, and help staff complete routine tasks more efficiently.

Newhart referred to acquisition specialists, who must keep up-to-date with regulatory updates and pricing, which changes frequently. Implementing AI to process this information would cut back greatly on the amount of time these specialists currently take in manually identifying these changes.

The panelists all agreed implementing automated systems for administrative work and data mining would drastically improve their efficiency. Another benefit would be its relatively stable cost and output. AI and RPA may need IT support upon initial implementation, but once installed, workflow becomes more stable.

According to the panel, there has been a fair amount of experimentation with AI and RPA; both Pratt and Schmader said their agencies have conducted small tests. Schmader said to start with a small, inconsequential task that can be expanded to greater functions. That way, if the project doesn’t meet expectations, nothing is lost.

Pratt’s staff implemented user-friendly automated tools to help scrub through data. As long as his staff understood the parameters and standards of the task at hand, it was smooth sailing with the new automation in place.

Automation in the Federal Government isn’t as nerve-racking as many feel. Unlike the fear of replacing blue-collar workers with automated systems, the Federal Government aims to use automation to bolster agencies that lack the manpower to finish tasks or seek to cut back on time used to complete mundane tasks such as data combing. It can also be helpful as a low-investment, high-reward tool for agencies that face budget cuts.

Even with all of the improvements that can be made by automation, at the end of the day, people are still critical to the mission of every agency. Each organization is responsible not only for determining efficiencies to be gained from an automation perspective – but also for ensuring that the professional development training needs of their workforce are being met.

Peter Olin is an Editorial Assistant with Management Concepts. He holds a Bachelors Degree in Journalism and Political Science from Penn State University. Peter has written for the Daily Collegian and helped launch the Executive Office for United States Attorneys’ first newsletter, The Minute.