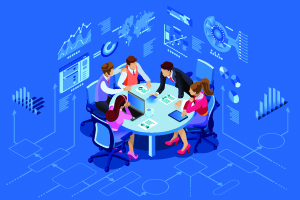 The Secret to Building a High-Performing Team

Before we can explore the answer to those questions, we must first define the word “team.”

A team is a collection of individuals working toward shared goals and making decisions using consensus; accountability is shared among the manager/leader and the members. When most effective, teams have the capacity to:

High-performing teams are uniquely committed to action, achievement, and maximizing opportunity. All organizations have teams, but not many can be crowned high-performing.

In the Harvard Business Review article, “The New Science of Building Great Teams,” author Alex Pentland characterizes high-performing teams as being, “blessed with the energy, creativity, and shared commitment to far surpass other teams.”

Members of high-performing teams are:

A team development and performance study by the Brandon Hall Group referenced in the Training Magazine article, “High-Performing Teams: A Crucial Differentiator of Business Performance” by Laci Loew included survey results from 191 organizations and found that approximately “72 percent of 191 organizations surveyed said team performance has a positive or extremely positive impact on overall productivity.”

Many organizations are leaving productivity and financial gains on the table by not investing in the development of high-performing teams. When the benefits are so obvious, the natural question is – why?

As you can imagine, the answer differs from organization to organization and depends on countless situational variables. But could it be that most organizations can’t get over the first hurdle in any growth situation – an open admission that the team in question is low-performing?

To be fair, job security, complacency, and personality conflicts are all obstacles in change management and cultural transformations. However, there is an inherent vulnerability required for team members and leadership to openly express that they are headed in the wrong direction and something needs to change.

For many organizations, this moment of clarity and vulnerability will never be actualized because the organization and the team are missing one essential element: trust.

Loew defines trust as “confidence, the absence of suspicion, and an ongoing record that confirms expectations of behavior and performance. Trust is expressed in the behavior toward others and will grow or shrink due to interactions and experiences.”

Teams that do not have trust are by definition, low-performing. Low-performing teams are stagnant, lack action, and rarely initiate growth activities. Collectively they operate timidly, reactively, and non-responsively.

Instead of becoming a high-performing, teams often fall into a wasteland of missed opportunity and drudgery which stifles productivity, shelves creativity, drains morale, and, most importantly, bleeds the company’s bottom line.

How do you foster trust to create a high-performing team?

By nurturing, developing, and prioritizing communication.

Great communication has numerous benefits for the individuals on the team and the organization. And, it is the only way to overcome the inevitable conflict that “arises from the clash of perceptions, values, or goals,” says Loew which can make or break any team whether they be low or high-performing.

Research has shown, “communication to be the most important predictor of a team’s success. Not only that, but they are as significant as all the other factors—individual intelligence, personality, skill, and the substance of discussions—combined,” says Pentland.

When members of a high-performing team communicate:

By shifting thinking and focus to improve communication and build trust, your team can take major strides in productivity.

The 1992 roster of the US men’s Olympic basketball team, which had some of the greatest players in the history of the sport, among them Charles Barkley, Larry Bird, Patrick Ewing, Magic Johnson, Michael Jordan, Karl Malone, and Scottie Pippen. Merely bringing together these players didn’t guarantee success. During their first month of practice, indeed, the “Dream Team” lost to a group of college players by eight points in a scrimmage. “We didn’t know how to play with each other,” Scottie Pippen said after the defeat. They adjusted, and the rest is history. The team not only won the 1992 Olympic gold but also dominated the competition, scoring over 100 points in every game.

This type of transformation is possible for any team. Depending upon the organizational culture and climate, positive changes can occur quickly – but it’s just as likely to be a slow process.

One thing is certain, however long it takes, developing a high-performing team will increase both productivity and morale while helping your organization to achieve its mission.