Posted by Management Concepts on May 9, 2017 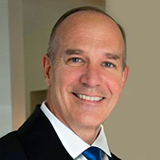 Bill Sutherland retired recently from his role as Director of Aviation Operations at U.S. Customs and Border Protection. He currently works in support of National Guard forces, and also works as Managing Director of UASOPS, LLC. Here is our Federal Spotlight interview:

MC: How long were you in Federal service, and what were your main responsibilities and roles?

Bill Sutherland: I joined the Army in 1985 and spent six-and-a-half years as an aviation officer. Then I got out and joined what was then called U.S. Customs Service. After 9/11, Customs Service combined with other agencies into the Department of Homeland Security, and Customs Service became Customs and Border Protection (CBP).

I was a pilot for CBP for a number of years, then I was a supervisor, and then I ended up being a director. The last role I had was as director of the unmanned aircraft program. CBP utilizes large unmanned aircraft, or drones. They’re used strictly for surveillance along U.S. borders and coastal regions.

I was in charge of the program, and I helped develop it. We had ten aircraft, and it’s approximately a $250-million program. I ended up working at Cape Canaveral Air Force Base. Because we were so successful surveilling the land border with the unmanned aircraft, we decided to try to apply them to the maritime environment. I set up the very first domestic maritime unmanned aircraft program based from Cape Canaveral.

Sorting out the air space, de-conflicting, and making sure the level of safety was on par with commercial activity in the air space was a tremendous challenge. I collaborated with the Federal Aviation Administration (FAA), DoD, DHS, and Coast Guard (USCG). It was a joint program between CBP and the USCG. We also collaborated with academia—primarily Johns Hopkins applied physics lab—for some sensor integration work. It was really busy, very challenging, and productive. Four years ago I retired, and the program is still going well.

MC: What kept you motivated and passionate throughout your career in public service?

BS: Initially, I was attracted because I was able to continue to fly and apply those skills in civil service. The mission was really cool. I performed exciting aviation activities with great people while flying very complex aircraft. I was detecting suspect activity from the air and directing law enforcement from the ground or from on the water. I flew some of the most sophisticated aircraft around with the coolest sensors. It was also a team aspect that kept me around, and then the ability to supervise and direct those activities kept me energized.

It boils down to the people, to the relationships that you start to develop while there. Great friends, great times. We worked hard and had a lot of fun together. That motivated me to continue serving. Then these bigger projects came along, where you’re dealing with a lot of different agencies, a lot of different personalities—challenges kept me around. The opportunities were there, and professional development was always there if I needed it.

You could craft your career if you really wanted to, if you stepped back and focused on that. There was a lot of latitude in my agency.

MC: What have you worked on since retiring?

BS: I’ve been in and out of the Military for various roles with the National Guard, the Reserves, and active duty. I wasn’t flying as much at the end of my career, so when I retired I was able to join my guard unit full time, which is a small detachment of eight pilots or so. I fly around the country, and I’m having a great time doing that. I still stay in touch with the UAS activities around the country and a little bit of consulting.

MC: What would you say is one of your biggest achievements?

BS: One of the biggest that I recall didn’t deal with aviation. It was in the CBP, Office of Air and Marine, which had 250 aircraft and 300 maritime vessels. These fast vessels operate along the coastal regions of the U.S. After 9/11, my organization merged with a law enforcement marine program that had these vessels and about 100 marine enforcement officers.

I was the national safety program manager at that time. We realized that the tactics and techniques the marine operations were using had a high risk of injury to themselves and to the suspects they were chasing.

We got a team together to lessen the risk to our marine enforcement officers. We developed tactics, techniques, procedures, and specialized munitions, and called it the Small Boat Interdiction Program. We did legal reviews, policy updates, and involved Agency Senior Leadership. It was an 18-month project, start to finish.

In the government, you might start something but not really see it completed. In this instance, I started it and finished it in 18 months, which was very gratifying.

After we refined the techniques, tactics, and got the policies approved, we trained approximately 100 marine enforcement officers over one summer. It’s been a highly successful program, reducing the amount of injuries while increasing effectiveness of our officers operating in a very hazardous environment.

MC: What advice would you share with the next generation of people entering, or considering entering, careers in government?

My advice to people considering entering the government is to come in, number one, but also to have a plan, a little bit of a roadmap of what you want to get out of the government. Try to develop that yourself and make sure your bosses know what you’d like to do. The government’s big, it’s got a lot of things going on, there’s a lot of opportunities, and a lot of training and experience-based opportunities.

I found that you can carve your own niche in the government, if you want, if you’re deliberate about it.

Once you’re in the government, keep your boss informed of your career aspirations. It’s easier for a leader to do their job—which is groom the next leader and then help develop the personnel around them—if they know what their employees want from their career. If it’s an open, honest dialogue I’ve always found that that’s helpful and it’s worked for me. But you’re in that relationship with your boss, so there’s some judgment involved. You’ve got to be able to figure out what you want to do, and your boss is integral in helping you get there.

Come into the government, find out what you want to do. Enjoy what you’re doing, get to know the people, work hard. A positive attitude is huge, and will serve you well.

MC: Do you have any advice for people transitioning or retiring from government careers?

BS: Take advantage of what the government offers, and know what you want to do. If you’re transitioning out, whether you’re retiring or you think you’re going to leave in a few years, you can plan.

You can educate yourself, you can go to more professional development, and you can try different jobs in the government to help you with that resume towards the end.