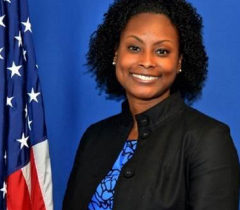 MC: How long have you been in Federal Service, and what is your main responsibility in your role today?

CB: If I were to start at the beginning, I had an internship during my junior year of college. I was a recipient of a Florida Georgia Louis Stokes Alliance for Minority Participation grant and interned at the USDA Agricultural Research Service in Tifton, Georgia in 2000.

When I graduated, I became a Federal contractor at the Marine Corps Logistics Base Albany, Georgia. From there, I went to state government and then returned as a Federal contractor from 2009 – 2011 with the USDA Forest Service and the Department of Interior. I became a permanent Federal employee of the State Department in 2011 and served as a warranted grants officer. I ended my time there working in the Bureau of Administration, International Programs Branch, where I developed, implemented, and managed Federal systems programs and signed up to $10 million per transaction. My family life changed in 2016, which brought me to Texas and my current position as Disaster Grants Branch Chief for FEMA. I manage a team of grant management specialists to help communities recover from natural disasters and implement hazard mitigation measures following a Presidential major disaster declaration.

MC: What keeps you motivated and passionate to stay in the public sector?

CB: My father was in the military; therefore I grew up with the mindset of working with the government. I like Federal assistance—which people primarily just refer to as grants—because I can see the direct impact it makes on people’s lives domestically and overseas. I’ve worked on all different kinds of programs, including Hurricane Katrina—a national emergency grant focused on assisting individuals get back to work after being displaced by Katrina; at the Department of Interior I also worked on restoring coastal areas, including wetlands in Mississippi and Alabama. Here at the State Department, I work on a vast array of projects ranging from cultural preservation in Bamako, Mali to countering violent extremism in the United Kingdom. As a civil servant working in the public sector, I’ve been able to work on a wide range of different issues that affect people, allowing me to see the impact.

MC: What is one of your biggest achievements?

CB: I think I’ve done a good job throughout my career with continuously learning, making forward progression professionally, and finding mentors. I’ve been able to establish and maintain good working relationships that have been a great asset to me throughout my career and helped me to become highly proficient in my career in Federal assistance.

To me, that’s an accomplishment—especially being a minority female with aspirations of obtaining a senior-level management position within the Federal government. I’m very proud of that. I graduated from Albany State University, an HBCU (Historically Black Colleges and Universities), and that experience serves as my foundation for success in growing professionally and being able to recognize and take advantage of opportunities.

MC: What advice would you share on making public service a career and not a pit stop?

CB: Be flexible. I would have never thought that I would have worked on so many programs at different agencies at the beginning of my career. My undergraduate degree is in computer science, which has absolutely nothing to do with what I do now. So my advice is, don’t put yourself in a box based on your past experiences… Give yourself a chance to see what you can do.

I was recently at an event where we discussed Millennials and their role in recruiting diversity in the Federal government. I was speaking to someone during the networking component and their background was in education and teaching and they thought they were limited with only certain Federal organizations applicable for their skills. Upon further discussion with other attendees this person learned of at least two other Federal agencies where her education would be an essential skillset! Don’t limit or disqualify yourself before even putting yourself up for an opportunity.

MC: What advice would you share with young people on entering government?

CB: When they first get started, it may appear as if everything moves very slowly. Which is true, but the long term benefits are worth it—if you’re patient and put the work in. Within two to three years you can get yourself on a good path as long as you’re willing to be flexible and open to different opportunities. You can really make a career out of it, and to be able to support your family and have a healthy work life balance.

MC: You’re also involved in Blacks In Government—can you tell us more about that?

CB: Blacks in Government (BIG) is a nonprofit organization focusing on advocacy and professional development. For me, it has served as a great resource in giving me exposure here at the Department of State. I encourage people—regardless of their life schedule—to be involved in employee affinity groups (some organizations call them an Employee Resource Group, ERG, or an EAG.) They allow you to be exposed to and have access to individuals you otherwise would not meet. I joined the organization as soon as I came to the State Department in 2011. My first leadership role was as the 2nd Vice President of the Carl T. Rowan chapter. From there, I became the Chapter President serving until 2015. I accepted these leadership roles because I believe in the organization and having the national president as a chapter member who also works at the State Department, I really saw her passion. She motivated me to want to do better.

I took that presidency very seriously. I served for two years in that capacity and increased membership by 28 percent, created a website, set up SharePoint, created media products, and re-branded the chapter to create a platform to focus on diversity in foreign affairs. Not only did it provide exposure for me, I got to meet Secretary Kerry several times as well as Deputy Secretary Antony J. Blinken, but we’ve also put on great programs and professional development events with the State Department.

While I’m no longer a chapter president, I’m also very proud of my latest project. When I first became a grants officer at State I started seeing all the different programs—educational programs and fellowships—that I had never heard of. I had no idea there are all these fellowships, exchange programs, and study abroad programs. I thought, “While I’m in this capacity, let me see what I can do to let more people know about these opportunities.” After about a year and a half of trying to sell this idea, I finally was able to get the buy-in from senior leadership, (Secretary Kerry and Deputy Secretary Blinken), and we hosted the 2015 Youth Forum in October of 2015, and Deputy Secretary Blinken provided opening remarks. It was a compilation of a year and a half of pointing out that there’s not a lot of diversity in management and of people who work in foreign affairs, especially those who are in SES positions—less than 4% across the government are minorities at the State Department.

One way we can help address this is by providing more exposure to youth so they can go to school and maybe look into service, or attain a degree in international relations or international affairs. Even if they don’t go to school for this area of study, if they go to medical school or they want to be an accountant or computer scientist, they can still work in foreign affairs. That has essentially been my baby, my main thing that I have just really been passionate about that BIG has given me the platform to accomplish.

MC: So how does the NOW Generation work?

CB: In 2013, I was appointed as the National NOW Generation coordinator by BIG National President Darlene Young. When I came on board, it really was to identify the fact that a lot of the members were baby boomers and Darlene wanted to try to make sure there were younger members joining the organization to become future leaders. Along with the committee, I try to create professional development and mentoring opportunities for members. For instance, at the Annual National Training Institute we have what’s called a Munch & Mingle, a lunch free of charge to at least 75 to 100 people in the NOW Generation demographic (under 40) where we provide them with networking opportunities with senior agency officials and have free giveaways to encourage membership.

Also through BIG, I was awarded the inaugural BIG/Management Concepts Leadership Certificate Program Scholarship, which I just completed.

Note from Management Concepts – Christian finished the Leadership Certificate Program in a record-breaking four months. She took six courses in the D.C. area and was awarded her certificate March 30, 2016.

*Answers reflect Christian’s own personal views and do not reflect those in her official capacity.