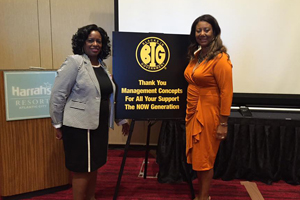 Management Concepts was a proud gold sponsor of the Blacks In Government (BIG) 38th Annual National Training Institute (NTI) held in Atlantic City, New Jersey from August 22-25, 2016. This was a very special year for the organization as it celebrated its 40th year as a national organization.

This year’s theme was “Commit to Excellence: Think,

Believe, and Achieve BIG!” and more than 1,600 attendees had access to 100+ workshops and agency forums addressing an array of critical topics to help them achieve excellence in their careers. The program led with a motivational speech by Denise Turner Roth, the 21st Senate-confirmed Administrator of the U.S. General Services Administration (GSA) and ended with a teary eyed Honorable Darlene H. Young, National President of BIG as she passed the baton to the incoming President Dr. Doris Sartor.

For those of you that don’t know, BIG’s NTI is designed to elevate the day-to-day work performance of government employees. With the increasing challenges and complexities facing all levels of government today, the BIG NTI focuses on providing critical management and supervisory training to enable and assist managers with develo

ping highly capable and competent employees to perform at their maximum level of contribution.

We helped them achieve this goal as we presented four training sessions for the first time at the conference. The following sessions were met with rave reviews from more than 150 attendees:

Additionally, for the second year in a row we were able to present the Blacks In Government and Management Concepts National Leadership Certification Program, encouraging others to think big as we awarded two training scholarships. We received many stellar applications and selecting recipients was a truly hard decision.

We also had the opportunity to expand our relationship with BIG’s NOW Generation, their under 40 organization that strives to build up the leadership of the next wave of executives in government, by hosting a Munch & Mingle during the conference. It was standing room only and we had both current BIG President Darlene. H. Young and President-elect Dr. Doris Sartor stop by to reiterate their support of the next generation of leaders and encourage them to think big!

Lastly, we sought to #thinkBIG and #winBIG with the exhibit hall attendees. The new addition of the Management Concepts prize wheel proved to be a big draw for the attendees. More than 300 surveys were completed and we were able to engage in great conversations as they stayed to find out more about our products and services.

Looking forward to a repeat performance for Atlantic City 2017, BIG!