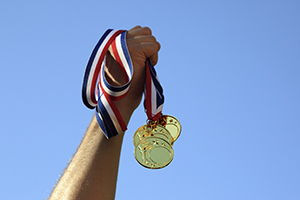 Building Your Own Olympic “Dream Team”

The opening ceremony of the 2016 Summer Olympic Games takes place this evening, kicking off more than two weeks of exciting competition involving the world’s best athletes. As an avid basketball fan, I am most interested in seeing if the U.S. Men’s basketball team can win a third consecutive gold medal. With NBA stars Carmelo Anthony, Kevin Durant, and Kyrie Irving on the team, the United States enters the Olympics as one of the most heavily-favored teams in any sport.

It is easy to take this level of success for granted. In the 2004 Olympic Games, a U.S. team comprised of future NBA Hall of Famers Lebron James, Dwayne Wade, and Tim Duncan failed to make the championship game after an upset loss to Argentina in the semi-finals. This loss forced USA Basketball to make wholesale organizational changes. One of the most critical changes was hiring legendary college basketball coach Mike Krzyzewski in 2005. According to many current and former players, Krzyzewski’s leadership skills and coaching acumen are responsible for the gold medals won in 2008 and 2012.

Krzyzewski wrote a book in 2010 (The Gold Standard: Building a World-Class Team) that explores the leadership choices and challenges he faced when rebuilding the U.S team. In reading this book, several pieces of advice resonated with me and my own work in organizational teams:

A common theme that emerges from these quotes is that building successful teams takes time and attention. Simply having the patience to allow relationships to strengthen over time is a critical leadership skill that is often overlooked.