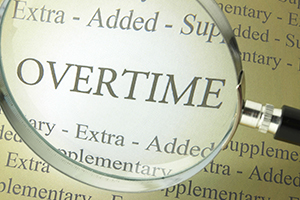 The Fair Labor Standards Act (FLSA) governs minimum wage and overtime pay for full and part-time employees in the public and private sector. On May 17, 2016, the United States Department of Labor (DOL) released a final rule that will go into effect on December 1, 2016, increasing the salary threshold for overtime pay. It is important for employers and employees to be aware of the new regulations as they pertain to executive, administrative, and professional workers in order to be fully compliant.

It is estimated that 4.2 million more salaried workers in the United States will now be eligible for overtime pay on December 1, 2016.

When the new rule goes into place, the salary threshold for the white-collar exemption from overtime pay will adjust to $47,476. This means that salaried workers who earn up to this amount are eligible for overtime when their workweek exceeds forty hours. The ruling also requires that the threshold for overtime pay be evaluated every three years. The first review date will take place on January 1, 2020, so this is something employers will need to continually monitor.

One interesting amendment to the current regulations is that employers are allowed to use nondiscretionary bonuses, incentives, and commissions to satisfy up to 10% of the new salary threshold provided the amounts are paid quarterly (or more frequently). Since many employers now use incentive compensation to drive performance, the Department of Labor appears to recognize this growing trend in employees’ compensation.

As a reminder, job titles do not make an employee exempt from overtime nor does their salary. The DOL made no changes to the current job duties tests. The exemption comes from the specific job duties performed by the employee. Employers should also note that when the FLSA and state law apply, an employee should receive the most favorable provision offered.

If you still have questions about the upcoming changes, there is a lot of helpful information on the DOL’s website including a comparison video which outlines the old regulations and the new regulations.