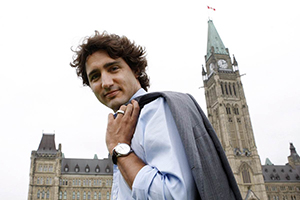 The newly elected Prime Minister, Justin Trudeau is bringing Canadian politics to the spotlight. The news is flooded with images of this young, charismatic, athletic (you have to admit that is an impressive yoga pose!) politician spreading a message of hope, change, and “sunny ways.” Trudeau brings with him the belief that politics can be a positive and powerful force for change. Canadians endorsed that message with a resounding “yes!” when they elected him to office with a “win of historic magnitude” according to the BBC. Trudeau’s liberal party claimed 184 of the 338 Parliament seats this year, netting 150 seats and making them the first party in history to move from third place to a majority in one election cycle.

So what lessons can we gleam from Trudeau’s rise to international leadership stardom?

First, his story proves that the power of engagement is undeniable. Casey Wilson, the author of The Cornerstones of Engaging Leadership says “…leadership must be considered a source of empowerment. The focus moves from what you want to what individuals want.” People rally behind this young politician because he is engaging. His charisma draws people in and genuine compassion for those he serves builds a sense of trust. He balances confidence with humility, conviction with empathy. This is an incredibly tight rope to walk and is a skill that must continually be challenged and nurtured.

The second lesson I take away from Trudeau is… well I’ll leave it in his words:

“You can’t run a government from one single person. What instead matters is that leadership be about gathering around extraordinary individuals and getting the best out of them.”

Isn’t that the key to success in any business? In government or otherwise, you need to get the right people around the table, with the right information, to have the right conversations. Trudeau gets at a critical issue facing the private and public sectors – the need to effectively leverage diversity to solve the big issues. What leaders across industries can learn from him is that there is value in bringing a diverse team together. These types of teams will push the envelope, challenge assumptions, and think critically about the issue.

The last lesson is one of sustainability. We don’t know yet how Trudeau’s time in office will pan out, but I have a sneaking suspicion he has thought about the sustainability of his message. How do you maintain enthusiasm and engagement while navigating the incredibly complicated and stressful web of politics? Trudeau has said:

He promises accountability. He vows to take personal responsibility for the transparency of his decision-making. It might sound simple, but if you put that in the context of the workplace – organizational structure, policies, bureaucracy – that can become very sticky. Accountability often comes with a connotation in the workplace, but it’s not about accepting blame, it’s about a commitment to clarity and achieving the desired goal. The most successful leaders are able to foster a culture of accountability by taking ownership of their decisions and actions, encouraging others to do the same, and building an environment where honest reflection takes the place of blame sessions and leads problem solving and lessons learned.