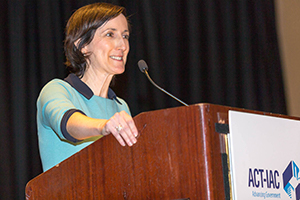 Earlier this week my colleague, Vi Zenone, discussed some of the outstanding things that occurred during the ACT-IAC Acquisition Excellence 2016 event last week – from the audience rendition of the national anthem to the cleverly placed reference by Claire Grady of “thinking outside the five-sided box” – but what stood out to me was the fact that the event was a realization of the essential mission of ACT-IAC: Advancing Government Through Collaboration, Education & Action.

I was fortunate enough to not only attend the event, but also participate in the planning and facilitation of two key breakout sessions: (1) “The Problem with the Problem Statement,” which was part of the Acquisition Innovation track and (2) “Lifting the Curtain – Inside the Technical Evaluation Committee,” which actually received a plug from OFPP Administrator Anne Rung during the lunch, and was part of the Advancing the Government-Industry Relationship track.

While my participation in the Acquisition Innovation breakout session dealt mostly with the facilitation of a small group exercise during the session, the collaboration I was involved in between the government and industry in the days leading up to the event was key in providing the appropriate material and an experience that was conducive to learning and relevant to the issues the members of the audience deal with on a daily basis – on both sides of the aisle.

That’s exactly what we need in today’s ever-changing Federal market – government and industry working together to understanding the roots of problems, so that requirements can be developed and advertised in a way that encourages innovative solutions. This session definitely accomplished everything it set out to.

But as we all know, developing and advertising a requirement is not the end of the acquisition cycle… it’s barely the start of the entire process. The hardest part for industry is the “go/no-go decision” and the evaluation – and that’s exactly what my afternoon session discussed.

I joined the afternoon session committee for the “Advancing the Government-Industry Relationship” track late in the game at the urging of my colleague, Jessica Klem, who was already serving on the committee. When I joined the committee, it was for the sole purpose of developing content for the session, yet it blossomed into a panel-sitting role, which was something I had hoped for, and it turned out extremely well.

The planning for the session was a highly collaborative effort between government and industry with the intent to shine light on a part of the acquisition process industry rarely gains insight to – the Technical Evaluation Committee. The mixture of the committee was essential to the session’s success because, being that this was a “Lifting the Curtain” session, the overarching goal was to provide both the industry and government perspective. (This session was part of a series, also mentioned in Anne Rung’s keynote; the previous event in October focused on the Bid/No-Bid decision also mentioned in the morning session above).We wanted to provide insight into the industry perspective, in regards to how industry analyzes and prepares responses to the instructions and evaluation criteria found in the solicitation, as well as the government perspective, in regards to how those responses are evaluated.

While we veered away from our planned agenda, I don’t believe the session could have gone any better. The dialogue between the government and industry audience members could not have been more candid. The government audience members discussed why they included certain characteristics in the instruction and evaluation criteria, and the industry audience members were more than open about why they either “go” or “no-go” on solicitations. The dialogue was amazingly honest, and highly interactive. I am thankful I had the opportunity to sit on that panel and prompt that type of discussion. I believe the session was a nice step toward busting those myths about government-industry communication.

Overall, the keynotes were great, and some really interesting events took place at Acquisition Excellence 2016. But what stood out to me were the breakout sessions. From the planning to the implementation to the in-session dialogue, the break-out sessions really exemplified what ACT-IAC and events like this should be about. Yes, it’s an information exchange. And, hearing about the new exciting big ticket items are a part of what draws a crowd. But this event really put the emphasis on the single most important thing missing in contracting these days – open, honest, and transparent government and industry dialogue!